A small but hardy group came to see a bird ringing session. They listened to Erica Wells, Runnymede RG member, about the ringing scheme (and asked lots of questions) and Erica explained what we're doing on the farm and how it fits into the national scheme.


Posted by Carl Hunter-Roach at 09:00 No comments:

Our February invitation to the public to come to Wolley Firs and see bird ringing in action was postponed due to the storms.

The good news... you can catch us this Saturday!

We got news of a Chiffchaff which we ringed in September 2019. This young bird left Bedfont and headed south. But where south? This bird was trapped and released this February, 1,970km south-south-west in Kenitra, Morocco. We'll have to wait patiently to see if the bird returns to Bedfont this summer!
February itself continued with the blustery winds and heavy rain theme and meant that little bird ringing took place this month. Twenty-four birds of eight species were ringed, an all-time low for the group, across only two sites: Bedfont and Minet.
However, much groundwork took place at Wraysbury Gravel Pits to improve the site for breeding birds and other wildlife during this quiet month for wildlife. RRG thanks Maydencroft for all their time and effort on the site. 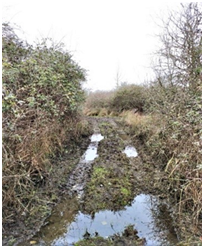 Opening up a ringing site
Posted by Carl Hunter-Roach at 09:00 No comments: