Two sessions at Woolley Firs and another at Bedfont took place ahead of the poor weather that dominated the end of the month.

The BTO set new rules for ringing that took effect from 14th December. As well as continuing the single use of bird bags the framework added recommendations for PPE, regular cleaning of equipment and the spraying of nets at the end of sessions. There have been revisions through December and some discussion between ringers on social media.

A quick trip to the main site on the 6th to the Private Nature Reserve at Bedfont. Three nets were put up in two places for 2½ hours. It was a calm sunny morning and a late start. 21 new birds were processed: a mix of the usual tits and a couple of Chiffchaffs and a lone Goldcrest. A second Treecreeper for the year was caught which was really encouraging. 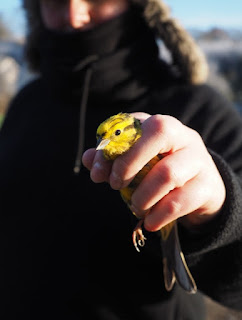 After a reccie discovered a flock of Yellowhammer on site we netted the fields on 10th. It was great to
have hammers back on the site and just as good to ring a dozen of them - the site’s best single day catch (the previous record being 7 on 13/12/2014). The decision to stop arable farming on the site and the chemicals that made it economic in the short term was clearly having a positive impact on the site for nature.

We gave the site a rest as the South East was hit by an extended cold snap but unfortunately bad weather closed off further options later in the month and the BTO’s new HPAI framework suspended further ringing attempts as we waded through the new requirements. We’re obviously keen to return in 2023.

Posted by Carl Hunter-Roach at 11:21 No comments: