With Covid-19 lockdown rules coming into force, ringing at all core and special interest sites came to an end on 23rd March leaving only garden sites able to operate.
Bedfont, Minet and Woolley Firs managed one or two sessions – even a public demo at Woolley Firs – and 75 new birds were ringed including 10 at garden sites. 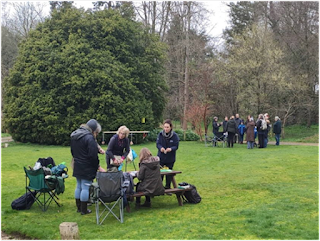 RRG public ringing demo at Woolley Firs (Karl D Tarratt)
Great Tit and Blue Tit topped the list of 17 species but there were nice records of Green Woodpecker at Minet, Stonechat and Linnet at Woolley Firs and a Chiffchaff at Bedfont. Thorpe Lea Road produced 4 House Sparrows and 2 Coal Tits. 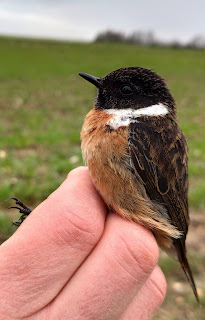 Young male Stonechat (Carl Hunter Roach)
We were pleased to see that a Yellowhammer we ringed at Woolley Firs Farm in December 2014 is doing well, 5+ years later and was caught and released by Hughenden Ringing Group at Jealott's Hill, about 8km to the south.
Posted by Carl Hunter-Roach at 09:00 No comments: