It’s always satisfying when you get the final CES “in the bag”. After last year’s windier trends, this year was dominated by drought. Check out the Wraysbury write-up to see how the site performed.

The BTO has published new guidance on bird welfare with respect to disease transmission. This new guidance is intended to help reduce the spread of avian influenza. 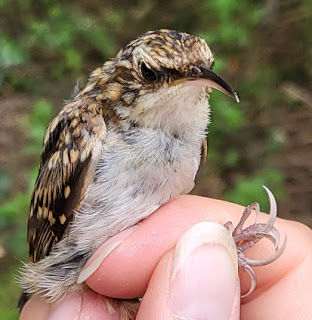 After a bit of a kick up the backside by KRP the Bedfont crew got out for the first time since
I went splat and broke my leg back in June. All the team turned out and my friend came along to help me carry stuff. All 9 CES nets were put up, although we didn't do CES this year, so it was good to cover the area.

The catch was slow to start with but picked up throughout the morning: 31 new birds and 4 retraps. As expected, juvenile Reed Warblers were dominant but a juvenile Sedge Warbler was caught, we only seem to get them on migration these days, none have knowingly bred at Bedfont for a few years. A new juvenile Cetti’s Warbler was caught and an adult retrapped. The biggest surprise was a juvenile Treecreeper (opposite).

Migrant Hawkers were the main dragonflies flying; one was caught in a net and a few Willow Emerald damselflies were also found - a species on the rise in England over the past few years.

CES 2022 started below 2021 figures, bettered CES 5 and then got worse at mid-season sessions (CES6-10) as the site dried out (as much of South England did). A downpour on the day before CES 11 really demonstrated what the site needed and numbers tripled from CES 10. Autumn migration had begun for CES 12 where numbers doubled (158 birds were processed when extra nets are included).

* migration is earlier in 2022 and August recorded 13 Willow Warblers passing through.

The 18th saw a species we last recorded at Wraysbury on July 2014 and not regularly since 2010: an adult Grasshopper Warbler (below), with heavily worn feathers, heading through the site. 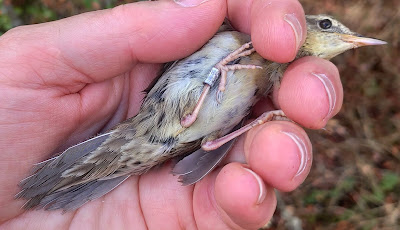 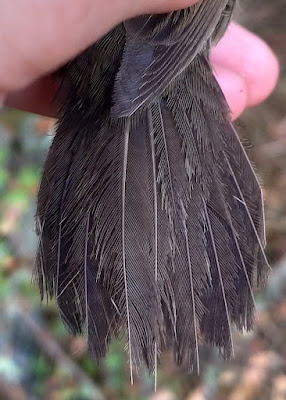 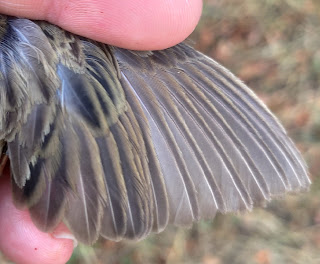 An adult Garden Warbler was also present. This is a species that undertakes a long winter moult and is renowned for its good feather condition. Unusually, this individual was relatively worn.
Note the missing and wear on the upper-tail coverts, tail thinness and tip wear, and worn primaries and tertials. Tertials are heavily worn and I’ve taken to looking at tertials as an aging guide on many more species in recent years. 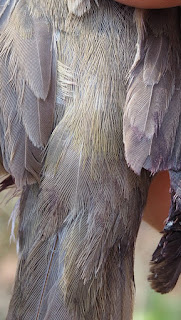 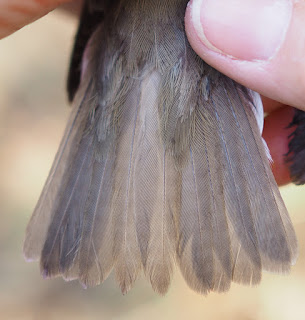 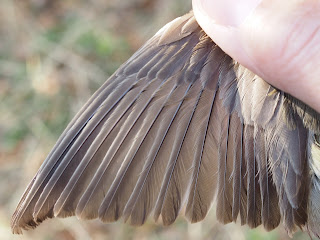 DemOn Q/A: How can I find same-day retraps?

This is a useful task to perform after entering any sizeable number of records which include
some retraps: 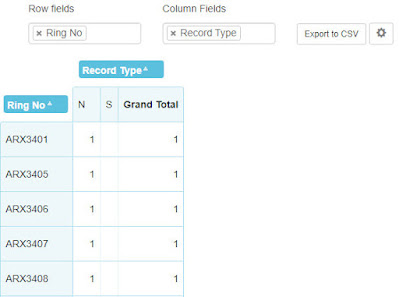 Posted by Carl Hunter-Roach at 14:55 No comments: