In the second month of lockdown only household-run garden ringing was possible following BTO guidelines.

Our Windsor ringer began a trial of the Garden CES and some boxlings were possible too. 85 birds were ringed of 10 species including 30 pulli. 27 House Sparrows indicate a healthy population around Thorpe Lea Road 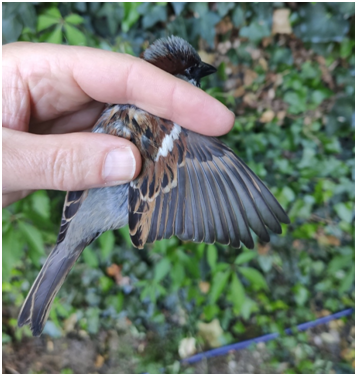 Our Ealing member used his ‘Noc-mig’ to identify the birds flying over his garden. Here's his account:

The ‘Noc-mig’ was used nightly from 1st -15th. However, the number and diversity of birds slowed right down and effort was reduced to setting the recorder to about every other day for the remainder of the month. During the month there were records of Common Sandpiper (1st), Moorhen on 5 dates (including two together on the 5th), Coot (5th and 11th) and a probable Whimbrel on the 12th.

For those thinked in ‘Noc-migging’ the picture below shows my very basic set up. I put the kit out on a chair in the back garden so it is raised up from the attention of prying foxes and other creatures of the night.

I also have an external hard drive to save files onto – each 3hr file takes up about 2Gb so will quickly fill up your computer’s hard drive otherwise. 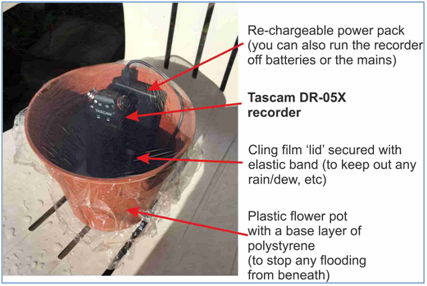 An excellent place to start learning about Noc-mig, setting up, what to record and analysing files can be found at www.nocmig.com.

Other useful resources are https://www.xeno-canto.org/collection/area/europe (for comparing others’ spectrograms) and https://birdnet.cornell.edu/api/ where you can upload your audio files and it will give you a probability of which species it is.

Away from Noc-migging, not much was recorded in/over the garden during the month, though the first local Swifts returned on the 5th and one or more Swallow were ‘heard-only’ heading north mid-month.