A change in tone for this month's blog as we write about subjects and use terminology familiar to bird-ringers.

An increase in 3J P birds marks the turning point of the season when young birds move off their natal sites and begin their post-juvenile moults.

The BTO has asked bird ringers to record more main wing moult scores: “record and submit a moult code for every bird and primary moult scores (e.g. 5555420000) for birds moulting their primaries, it will help improve the quality of the data if you don’t already.

This can produce information on the timing of breeding and a multitude of different analyses like the phenology figures on the online report pages.”

The heat continued to dry the site out and this, on face value, must be having an impact. CES 9 was particularly miserable with only a dozen birds in 360’ of netting. Highlights included ECP’s first Magpie on 16th.

If we look at CES July as a whole then we see its missing numbers of Blackcap and Whitethroat, though Chiffchaffs have actually outpaced 2021 catches. We’re not seeing large tit flocks at  Wraysbury either. 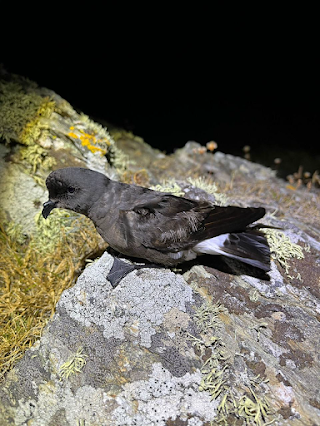 Just back from my annual week’s birding and ringing on Bardsey. Plenty of Storm Petrels (see
photo opposite) to ring at night - up to fifty caught in an evening - and lots of Manx
Shearwaters.
The population of shearwaters has at least trebled to over 20,000 pairs since I first went there in the sixties. They are easy to catch - you can walk around with a torch at night and pick them up! Not clear why the numbers have increased but they are long-lived birds - one is at least fifty years old and onto its third ring.
They are in the midst of a satellite tagging project to see how far they move on feeding trips which involves tagging them and checking the burrows in which they nest at night every evening till they return - the map shows one such track indicating some birds cover hundreds of miles over a week or so - whilst others stay close to home and come back every night. The young birds are literally just a ball of fluff and the observatory monitors a hundred burrows each year to get a sense of breeding success - weighing the birds each week - you simply sit them on the scales! They grow quickly to around 700g and then the parents stop feeding them and they fledge on a suitable dark night at about 550g with the wings fully developed. (Further reading Editor) Warbler movement had just started with a
number of bright yellow youngsters about (see
photo opposite). About half were still completing post-juvenile moult, so probably only about 6  weeks old.

News from The Parks

In June, we did four goose/swan catches at different inner London Royal Parks (Hyde Park, Kensington Gardens, St. James’s Park and The Regent’s Park). All the birds were captured by hand, feeding and grabbing (proper round-ups not being allowed).
The catches were timed perfectly to coincide with the rail strikes (!), meaning that some of the
people who had planned to come couldn’t make it. However, over the four mornings, a total of 23 adult and 2 young Greylags were captured and 8 Mute Swans.
All the Greylags are now sporting smart, white colour rings with a 4 alphanumeric code starting U3 and the swans have orange rings starting with the number 4 followed by 3 letters.
More catches were planned for July, though this time the available dates chosen coincided with the hottest UK days on record, so catches had to be cancelled, sadly.
The moult counts for the two months for all four parks combined were 523 (June) and 664 (July), so plenty more birds to ring.
To date, fifty-seven Greylags have been colour-ringed in the Central London Royal Parks since September 2021 and the project is already producing results with the birds being resighted in Richmond, Kew Gardens, Dagenham, Finsbury Park (2 birds), Orpington, and Southgate, as well as movements between the different parks. So, keep an eye
out for them!

A couple of pointers for coding moult beyond 3J P.
3J F is used to record partial replacement of primary flight feathers. Useful for Goldfinch
where a proportion of young birds replace some primaries.
3J T is used when a bird is moulting tertials and/or tail feathers. Some 3Js replace their
central-tail feathers during their post-juvenile moult. Chiffchaff is a species where young
birds commonly replace their central feathers.

Demon Q/A: do you know reportworthy_flag?

Flag Report note Comment & thoughts
Ringers will need to define significant movement and might use Other to mark photographic records.
* A Q recovery example: a Barn Owl ringed in Oxfordshire was found dead, in Helmland
Province, Afghanistan at Camp Bastion, 5,700km away. The BTO suggests the bird was
inadvertently transported, in some way, by the army.
Posted by Carl Hunter-Roach at 09:30